Yessiree!  It was a new day at the gym for debby!  My first class.  And it was a doozy! That TRX stuff is not fooling around.  They use those ropes and pulleys to do some serious body-weight weight lifting.  Some pilates type stuff, a few yoga stretches at the end.  I REALLY liked it.  And for those of you who keep track of how much I [don’t] sweat, yep, I was sweating.  I felt like my face must be bright red.  Fortunately, I looked pretty normal in the mirror.  It was a beginning TRX class, and there were only two other older women and the instructor in the room when I got there.  The instructor was an older woman who looked like a really normal person–yay!  I could see when we started working out that she had some serious muscles.  We were joined by one young man.  So it was a nice small class–a nice size for a good learning experience.  The instructor looked vaguely familiar, but I just thought I’d probably seen her around the gym.  At the end I asked if she knew my neighbor (who had recommended the class) and she said–YOU’RE THE ONE WITH THE DOG!  I was a little surprised,  and I looked down at the dog hair on my black workout pants (yes, even though I used the sticky roller just before I left the house, I still arrived at the gym with a little Noah on me.)  Then she said, “I know you from dog training.”  Of course! that’s why she looked familiar.  Isn’t it funny how when you see someone in a different setting you can’t quite place them?

Anyway, I plan to make this a weekly event, and after I get a little better, I will take some of the other TRX classes.  The thing about working out with someone else is that you are challenged (either by the group dynamic, or by your own competitive impulse) to do a little more, to go a little further.

Jumping in the pool after this workout was a real treat.  I only swam for about 25 minutes.  Could have gone longer, but I really needed to get on with the day.

Getting on with the day involved:  taking the car to the mechanic’s.  When I went out to go to the gym this morning, the car was COMPLETELY dead.  I thought for sure I was going to miss the class, and I was so disappointed.  Then I thought of calling my neighbor.  He works, but I thought it was worth a shot.  I tell you, these neighbors have their picture in the dictionary next to the definition of ‘neighbor.’  He came over on his three wheeler, and brought a new battery to give me a jump, because his truck was in the shop, and the three wheeler didn’t have enough juice to jump my SUV.  (His wife is my long-time ‘babysitter.’)

So, as I feared, it was not the battery.  It was the alternator.  And, OF COURSE.  It is in a difficult place to get to or work on, so the repair will cost extra.  But hey.  I have my new retirement budget, and as long as nothing goes wrong next month, this will still be within budget.

Of course that extended time at the mechanic’s was not in my MEAL PLAN.  Ack.  I was hungry.  Held out until I got home, and tried not to inhale the bowl of cherries, yogurt, and granola I threw together.  I am loving this new granola–I have really gotten to be a processed food snob, and I could alway taste the processing stuff in the store-bought granola.  Thanks again Shelley.

I got some fresh basil at the gym (Vicky was selling it.)  Plan to make some tomato/fresh mozarella/basil topped with a little olive oil and balsamic vinegar.  I’ll add something or other to that for dinner.  That’s one good thing about eating so late.  No need for a mid-afternoon snack.

We had a wee bit of a cool-down here, so I took advantage of that to get a little gardening done earlier this morning.  One of my Japanese maples desperately needed to be re-potted.  No, July is not usually the month that they recommend for doing that type of thing.  I’ve had good luck in the past though, and re-potting is preferable to going all summer with your roots drying out because you are in too small of a a pot.  I also had a really pretty little hydrangea, and a few asters I had bought.

The little hydrangea--isn't it lovely? I got it at Trader Joe's!

My most favorite groundcover--Corsican Mint. The most lovely smell. Every year I try to grow a pot of it.

Oh!  I had forgotten how lovely it is to garden.  Moving that soil around in my hands (I buy the big bags of Miracle Gro soil when they are on sale at Costco each spring,) and fixing the little plants in place, watering them to give them a good start.  Its such a hopeful process.  Before I was even done, Noah reminded me why I haven’t gardened for a couple of years.  He just picked up that little hydrangea that I had just repotted, and was starting to move it someplace else!!!  I guess he has a pretty soft mouth, because the poor little thing wasn’t damaged.  I found an old tomato guard that fit perfectly over it, at least until it has a chance to put down a few roots.  And then, before I could turn around, there he was with a blue aster in his mouth!  Sophie (who loves all things pink) was eyeing the pink aster!!!  I found a little wire fence to put around the asters.  I am not into building barriers while I am gardening, so that will be the end of my gardening efforts for a while.  I think Noah will get used to new things appearing, and eventually I will be able to garden again. 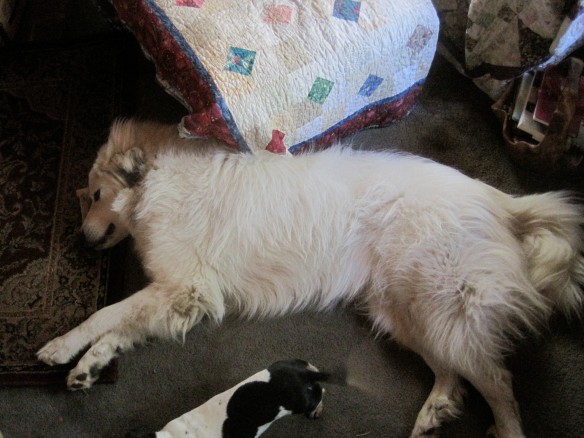 All worn out from his morning of "landscaping."

So that’s the events for the day.  Only got a little quilt planning done this morning before I had to leave.  Sometimes the planning is more fun than the doing, though.  Gonna work on it a little more, and then tackle the two clean-up projects I assigned this morning.

P.S.  Just went out to check on the plants, and almost all of the asters were be-headed!!  LOOK at who got caught in the act– 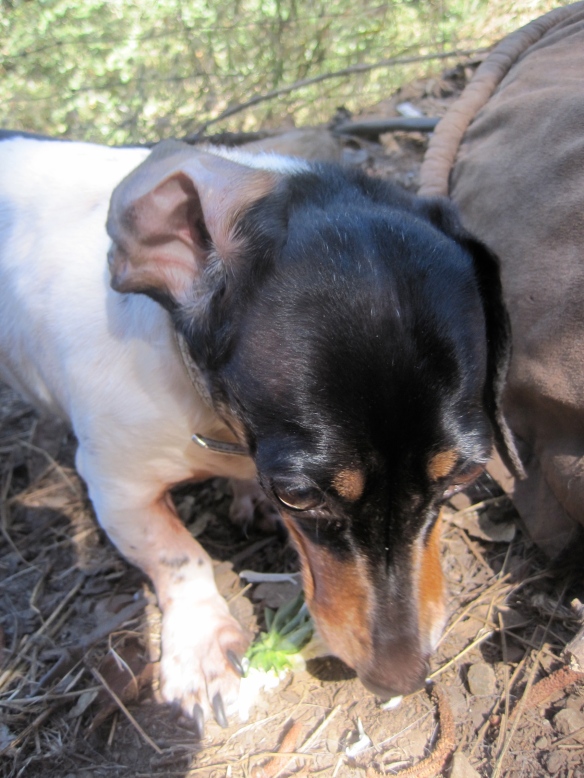