Exercise after injury:  I have been very pleased with my progress and thought I would share my thoughts with you.  The ‘minor injuries’ were my hands after the two hand surgeries, and my knee, after I did whatever it was I did while trying to run.

My hand strength was decreased, and my wrists were weak after the surgery had healed and it was okay to go back to weight lifting.  Plus, even though the doctor said it was okay, I sure didn’t want to mess something up inside there!  So I just started out with much lower weights than I had previously been doing, and increased the reps.  When I normally would do 3 sets of 10 reps at 80-100 pounds, I now did 3 sets of 15 reps at 60 pounds.  Some of the exercises that required me to really grip with my hands I just deleted for a while.  Now, with the surgeries 3 months behind me, I am almost back up to my previous weights and am able to do all the machines that I had been doing.

For my knee, I basically did the same thing.  I decreased the distance I was walking, but took more walks during the day.  I backed off on the weights and increased the reps again.  I made sure to do two of the machines I liked the least every time I was at the gym, because they would increase the muscle strength above and below my knees and support them.  They are the ‘hamstring curl’ and the ‘seated leg extension,’ again with the lower weights and increased reps.

New version of an old recipe:  Not sure what to call this–Blueberry Scone Cake?  Whatever, it was quite satisfying, and I will be adding it to the rotation.  The idea came from a couple of different factors.  1–those frozen blueberries staring at me as I opened the freezer each day.  2–I could make scones, but I was feeling lazy.  And 3–I have a lot of different types of ‘flour’ and I would like to find a way to use them that I like.  One of those being the coconut flour, which I have not enjoyed so far.  That was bugging me.  Because I DO like coconut.  For the lazy part, I wanted to try making them in one unit instead of separate scones.

So I started with my basic scone recipe.  I replace the two cups of flour with 1 cup spelt flour, 1/2 cup of chickpea flour, and 1/2 cup coconut flour.  I knew I might have to adjust the liquid for those last two flours.  The rest of the recipe I used exactly as is.  I mixed up the dry ingredients, and then added the wet.  The yogurt I used was NOT thick yogurt, and I added the whole cup of almond milk.  And then I let it set for about 10 minutes to see if the flours soaked up the liquid and became too thick.  The batter looked just about right.  Still thick, but a little stickier than when I make my scones.  I plopped half the batter in the pie pan, spread it around evenly, and then put 2 cups of thawed blueberries on top (if you tried to mix frozen blueberries with such a thick dough, you’d just get a messy blue dough,) and then topped it with spoonfuls of the remaining batter, which I tried to spread evenly over the top.  (I did not top with melted butter and sugar like I do my scones.)  Then I baked it.  And here’s where I need to do a little more investigative work before I publish this as a recipe.  I kinda knew better, but I just set the oven for the same temperature and the same time as the scones.  It was not done.  Five more minutes and it looked done, so i took it out.  30 minutes later as I tried to cut myself a slice, it was not done.  back in the oven at a lower temperature for more time.  I think it should probably be cooked at a lower temperature (350-375) for about 30 minutes or so.  Anyway, it did get done, and it was quite tasty and very satisfying to me.  As all low-fat cooking goes, the texture is different (denser?) than normal baked goods.  But I like that.  Plus I was really pleased that I included a good amount of these other flours and succeeded at baking something that I am not going to throw out! 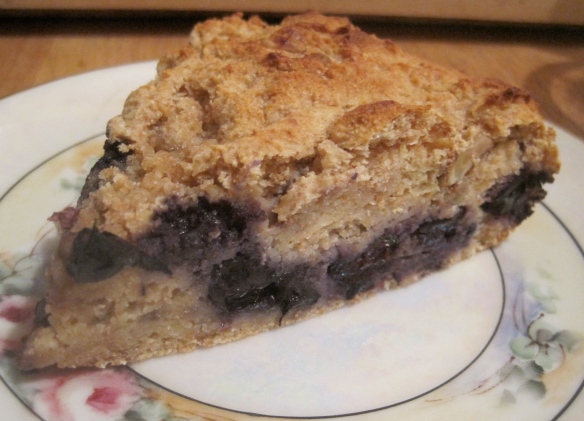 Product review:  The Magic Bullet.  As you all know, Magic Bullet did not give me anything free.  This is just my opinion.  I am a little disappointed in my Magic Bullet.  It does not pulverize ice cubes or frozen fruit nearly as well or as quickly as it likes to claim.  It does a terrible job of ‘chopping’ fresh fruit.  In fact, I ran back out to my back porch and rescued my Cuisinart mini-food processor that was on its way to the thrift store.  I do like the convenience of the Magic Jack, being able to make a smoothie and then drink it in the same cup.  I will probably get more use out of it during the warmer weather.  Maybe my skills at using it will improve.  What I do LOVE about it is that it works great as a coffee grinder!  I had long ago stopped grinding my own beans.  I love how it grinds the beans evenly and then I can just keep those in the same cup for the next couple of days.  All in all, I’m happy I got it.  But I’m VERY HAPPY that I did not give my mini food processor away!

Magic Jack.  Does anyone else have one of these little doohickies?  I’ve heard about it for years.  Lately its been bugging the daylights out of me, how much I am paying for various phone services, and the service is not even as good as it was in the olden days.  So I finally decided to try it–its supposed to have a money back guarantee.  $39.95 is all it costs you for a whole year of local and long distance unlimited calling.  You plug it into your computer and make your calls through there.  You still use your regular phones.  So far I think its great.  Your computer has to be on to receive calls, but I leave my computer on all the time.  The calls are crystal clear, and there is not the time delay that I seemed to be having with my long distance server.  I did have to change my phone number.  I chose to pay $3.00 to choose a number that I liked.   But you are supposed to be able to keep your old number–probably that works in larger towns.

Well, its another bright and sunny day here, with a high of 68 degrees predicted.  I am going to make myself get in the pool today!  Saturday I will be doing Lori’s Heart Healthy challenge–I am going to do 30 minutes on the bike at the gym and 30 minutes in the weight room–just a little more than I usually do now.  Plus I might end with 30 minutes in the pool–not guaranteeing that one!  I will also get in two 30 minute walks with the doggies–one Monk-speed (slow) and one fast, with just Noah.

10 thoughts on “Exercise After a Minor Injury and Other Stuff”