So I want to tell you all about my week at rug hooking camp.  But first I have to tell you about a rather monumental event that happened before I even left.

So it all started when I took my good animal-loving friend out to lunch for a belated birthday celebration.  This was less than a week before I was supposed to leave for camp.   Lunch was okay, but not primo, and so I said, ‘wanna go get a small frozen yogurt for dessert?  As well as being similar in the animal loving arena, we are also kindred spirits when it comes to frozen yogurt.  So imagine our mutual dismay when we drove up and the yogurt shop was completely closed down.  Our desolation was deep, let me tell you.  So friend says to me, “wanna go to the animal shelter?”  “SURE!” I agree.  Ruh roh.  You can see where this is leading.

So we go in.  Oh dear.  So many cute kittens.  I resist.  I have one old cat who does not want to be bothered with young energetic kittens.  First doggie room.  My gosh, I am not kidding you, I have never seen this many cute dogs at our little local animal shelter…  We left that room, and I thought I had made it safely through the gauntlet of cute animals needing homes.  “Oh, there’s one more room,” my friend(?) says.  And we go in this room, round the corner, and there are two PUGS sitting there staring at me.  Just the day before I had written a note to my mom mentioning how Mr. Monk was one of my best dogs ever, and how I was worrying that he was starting to show his age.

The pugs weren’t even up for adoption yet because they were waiting to see if their owners came to claim them.  A few days later, they were available, but now it was close to the time I was to leave for rug hooking camp.  I called my friend(?!?) and she said, “Oh, I’ll keep her while you’re gone.”  So I traipsed down to the shelter on Saturday morning, expecting a hoard of people who would want to adopt her.  There was one other couple there, and they decided that they wanted the male pug, which left just me to adopt the female pug!  I know.  As Shelley commented, “you crazy girl!”

So the postlude to vacation is that I picked Bess up from my friend’s on Friday afternoon on the way home from rug camp, came home and made the introductions to the Queen and Mr. Monk, and then Saturday morning picked Noah up, and introduced them.  It is almost eery how smoothly its gone.

I googled “introducing a new dog to the household” and the first reference said “it can be dangerous to bring a new dog into your house.”  I decided to skip that one and go with the Humane Society’s advice.  “Introduce in a neutral environment.”  Too late, we’re home.  “Have two people, each with one dog on a leash.”  Hmmm.  There’s only one of me.  So I decided to put a leash on new dog and Sophie, and took them out to the yard (semi-neutral territory) and then I remembered the Dog Whisperer’s advice to walk the two dogs together to establish a pack.  So we walked around and around the yard.  Then Sophie went back inside, and I did the same thing with new dog and Mr. Monk.  Then we tried all three off leash in the yard, and finally all three in the house off leash.  I watched really close for any ‘doggie domination’ behavior and told them to cut that out.  The other thing I do when I bring a new dog home is to make sure the older dogs get just a little more attention than the new dog.  That seems to keep everybody on an even keel.

Introductions with Noah were similar.  Introduced new dog on the opposite side of the fence at first.  And then Noah on leash and new dog off leash in the yard.  I didn’t figure Noah would be much of a problem.  And he wasn’t.

So the name.  I had a couple of names I kind of liked.  But none seemed exactly right.  Then Shelley mentioned that the Queen now had a footman and a lady in waiting.  so I googled ‘famous ladies in waiting,’ and got to this site.  When I read this description, I decided Bess was the perfect name.  “Bess of Hardwick.  Started her life relatively poor.  She married four times, became a lady in waiting to Queen Elizabeth I and was the seond most powerful Elizabethan woman, next to Queen Elizabeth.”  That sounds like the exact balance of power we want in this house, right?

So here she is, with me in my new glasses, which do not have the anti-reflective coating on them.  I had so much trouble with the last pair scratching and then getting a permanent film on that coating that I decided to go without.  Thus the reflection.  Oh well.  Back to Bess, she does stick her tongue out a lot.  She has an underbite, so I guess that’s why.  She’s supposed to be only 2 or 3 years old.  She had just recently had a litter too.  Can you imagine somebody NOT coming looking for such a little darling?  She’s very small for a pug.  Much taller, but probably about the same size as Sophie.

Here she is on the corner of the sofa she has claimed as her own.

The Queen doing her best to look noble at the opposite end of the sofa (the one closest to me of course.) 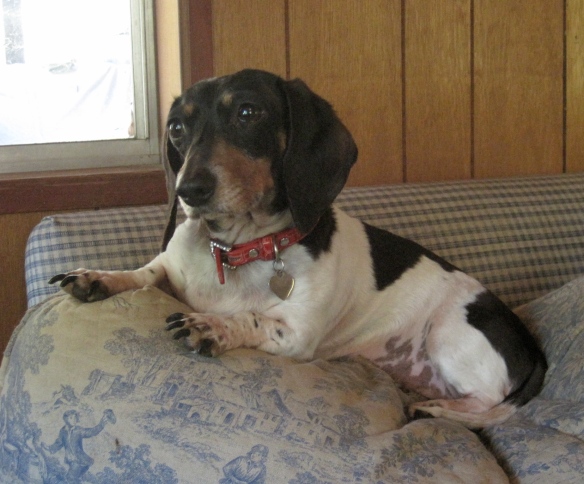 And Mr. Monk keeping an eagle eye on things.

So that’s the big news around here!  I hope this is not a honeymoon period, because its very peaceful.  Maybe a little noisier, with one more snoring dog, but that’s okay by me.

9 thoughts on “Prequel to Vacation”