I made this pizza out of stuff I had leftover in my fridge. Look through your refrigerator and see what you have that might be good for pizza toppings. In my opinion, you need mozzarella cheese and marinara sauce for it to be a real pizza.

What I had on hand: mushrooms, onion, pineapple, roma tomatoes, a little bit of pepperoni, and some olives. I use Trader Joe’s whole wheat pizza crust. I love this stuff. The dough comes pre-made in a plastic bag that you can stick in the freezer until the mood hits.

You also need a piece of scratch paper to write down the calories on all the stuff you add to the pizza. This pizza dough is supposed to make enough crust for 8 slices. But I stretched it extra thin, so it ended up making 12 nice sized pieces.

I measured out the marinara sauce (I used Contadina’s for this. I also like TJ’s marinara sauce.) Both of them are pretty low in calories. I used string cheese for the cheese. Just because they are pre-measured, and I don’t use much cheese. I thought I would only use 2 (2 ounces.) That was really pretty skimpy, so I added a third. I sliced the mushrooms and onions, and spread them on there. And then measured out a couple Tbsp of olives, and cut up one cup of fresh pineapple. And I cut the 8 little slices of pepperoni into little bits and spread it around. Oh, and then I cut up one roma tomato and added that on top. 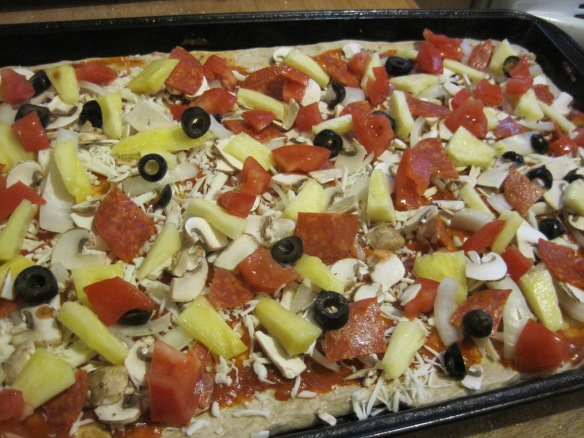 Now here’s where the brutally honest part comes in. It would be so easy to add just a little bit more of this, or a dab more of that. But if you want to enjoy your pizza without guilt, just be honest. Only use what you measure and count.

Here’s how it added up:

Grand total: 1530. Divided by 12, that makes it 127 calories per slice. The first night I took three slices, but that was really too much. Two slices would have been just right. The rest of the pizza was wrapped in foil and frozen for later. I reheat almost everything at 425 in my toaster oven. Just like fresh baked.

I always like to have some kind of plain green vegetable with my pizza. Not that I make pizza all that often–I probably make pizza once or twice a year. This was so delicious!

So did you guys hear that we had a freak snow storm here on Tuesday? It dumped so much snow so fast that I couldn’t get home for about three hours. There were cars sliding off the road all over the place, and both main roads that I take to get home were closed. I was so happy to get home before dark and to find that the electricity was still on.

The view off my deck the next morning: 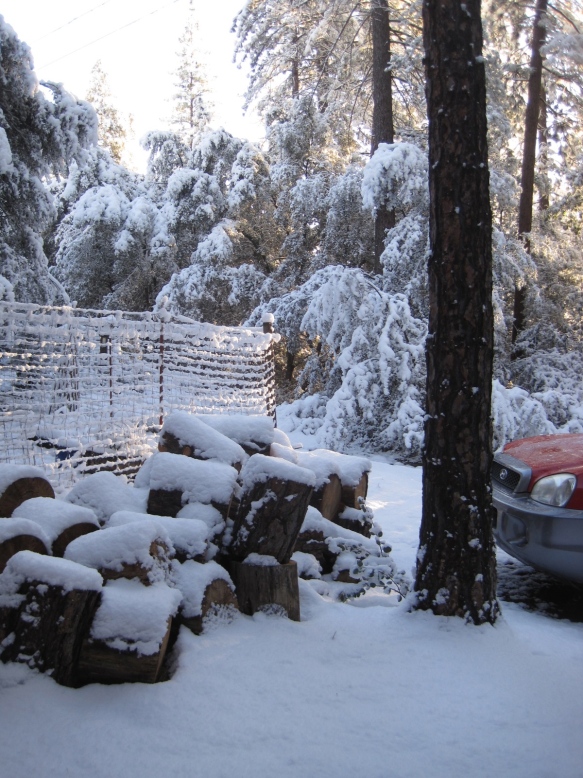 We took a walk before it all melted away.

19 thoughts on “How to Build a Better Pizza”