I only buy one type of nylabone for my dogs. Because that is the only type they like. And I am a good doggie mom. Nylabones never wear out, but it seems they eventually lose their charm. So I buy more. Recently I bought three new nylabones (three doggies.) Although, Bess only occasionally gets into chewing on them, and Sophie only grabs one when I am doing my exercises. She gets nervous when she can’t control something, and apparently my being down on the ground making strange shapes falls into that category. Noah still enjoys his bones every day.

ANYWAY, sometime in his adult life, Noah developed the bad habit of burying his bones. Even though I try to keep watch, he immediately snuck outside with two of the bones and buried them. If he would dig them up and use them again, I wouldn’t get irritated. But apparently he forgets where they are.

So I put the last one up, and only gave it to him after I closed the doggie door. This displeased him greatly. He wandered from door to door in the house, hoping for a magical exit to open up. 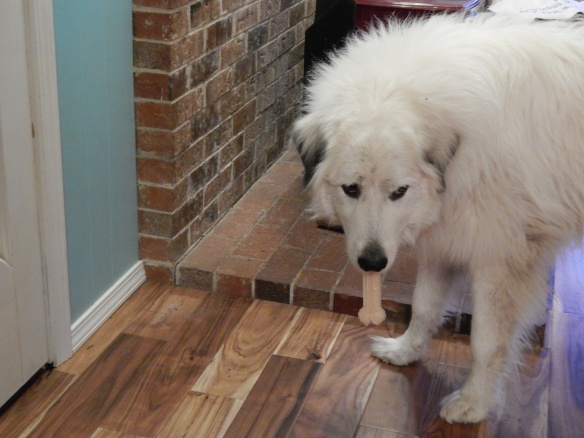 He is an expert at giving me that “hangdog” look. But I do not cave. There is still one good nylabone in the house.

14 thoughts on “A Dog With a Problem”