I spent four days the past week consistently working in the garden. Weeding weeding weeding. And watering. Moving plants around. And yes, I did go to the nursery and get quite a few plants for all the empty spots. This year I tried to be more organized, and  paid careful attention to the labels–FULL SUN, PART SUN/SHADE, and FULL SHADE. I think I did a pretty good job of getting plants that might thrive in the environment that I have.

Then yesterday MLG came over to help out. I swear, he can do more in four hours than I can do in four days.

I didn’t tell you about this little incident that almost gave me a heart attack. Last week, when I was out of town, I got a text from my baby sitter saying that Zoey had escaped the dog yard, and then escaped the big yard, and a neighbor had found her barking to get back in. She told my next door neighbor, who put her back, and then called my babysitter (who lives on the same road,) and she came over and found the little hole that the bad little girls had dug under the fence. Zoey was the only one small enough to get out! Its not safe outside the big fence, so I was really upset that that happened. My babysitter texted me twice a day to reassure me that all the dogs were still in their yard, which was sweet of her. Anyway, that was the first thing I wanted MLG to work on–fixing that area of the fence so they couldn’t dig out again. He is so clever about just looking around at what materials we have available, and using those for repairs. He suggested putting the pots there for a deterrent, and also just to make it look nice. Good idea. He arranged the pots and put the dirt in them for me, and then after he left, I dug up some of the crazy impatiens and repotted them, and put that bark there, just because I had it. I was pleased to see this morning that it looks like the impatiens have survived their move. (In case you’re wondering, the majority of the dog yard is chain link fencing, but that small area between the storage shed and their dog house is different.)

I had said that we were done with the stone work a while ago, but actually MLG had requested a few more large stones to finish up this area. I picked out six huge stones at the stone store. Just six stones weighed 300 pounds! It finishes off this area nicely. 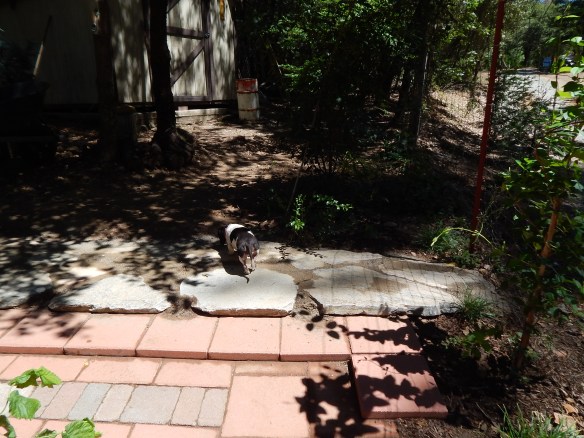 MLG did this the last time he was here. The ground cover in the foreground was in a pot. I told him I was ready to toss it. He doesn’t like killing any plant, so he suggested planting it in the back garden. It has taken off nicely. 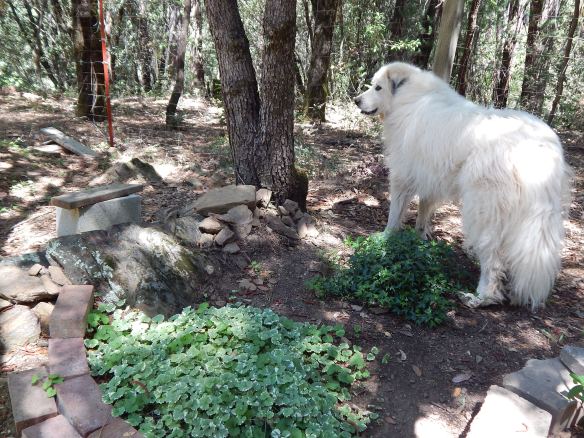 This is a new little area. I just planted a row of lobelia, and a new plant–I think the guy at the nursery called it False Oregano. 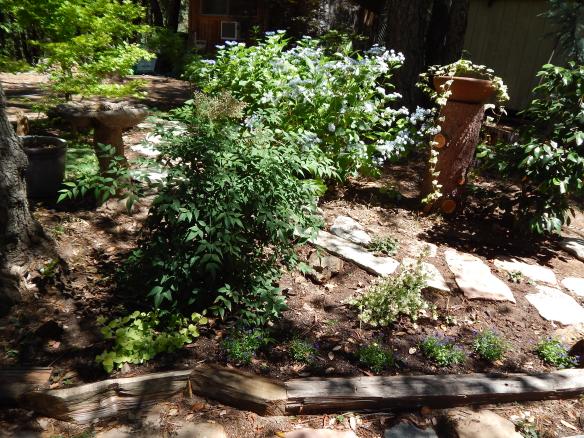 I think its really a pretty, unusual plant. 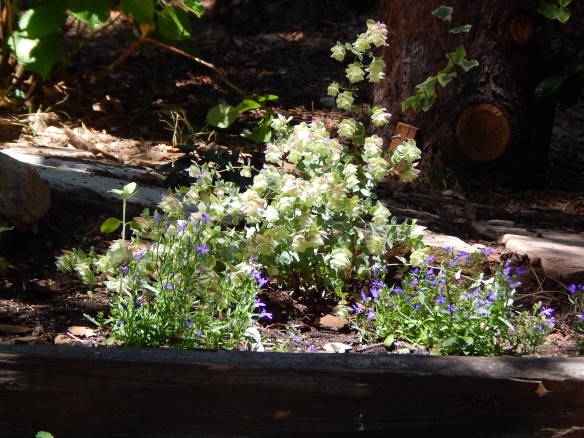 The rose bed lost the big clump of snapdragons this year. So I got one of my favorite lantanas, and a new-to-me violet yarrow to fill in. I will plant new snapdragons in the fall. 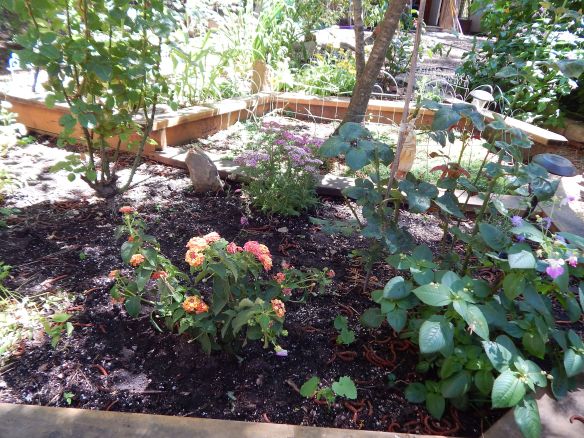 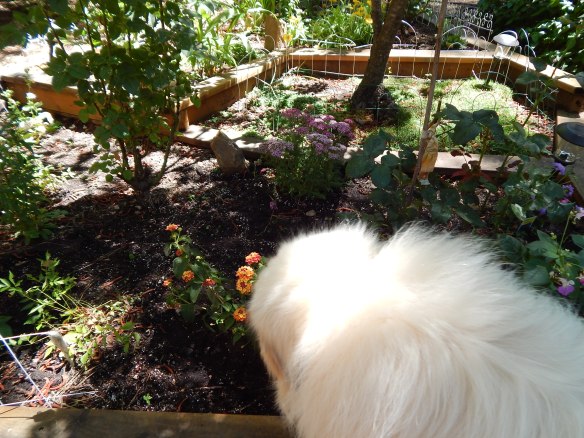 I added some begonias to the shade garden, and the double impatien in the pot is starting to bloom. 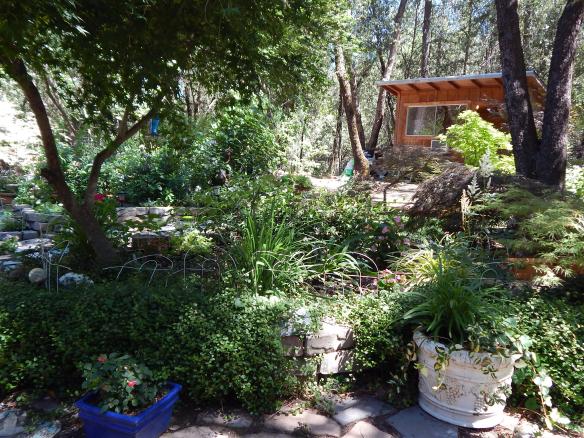 I found this cool plant with the huge leaves, that said it needed part shade. I hope it will do well in this  spot. I’ve had a hard time finding a good plant for this little area (adjacent to the shade garden.)

The front bed, which has now become a pretty shade spot, thanks to the cherry tree and the honeysuckle. I did the most weeding here. It was a mess. In the fall I will replant the daisies to a sunnier spot. I found these new plants that need shade. They are a bright yellow-green color, and the flowers, which are supposed to flower all summer and fall, are a gorgeous shade of violet blue. Hmmm. As you might have noticed, I am terrible about keeping plant labels and remembering their names. Sorry ’bout that. 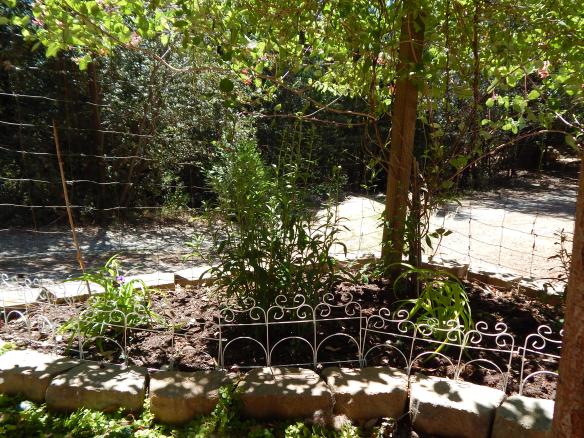 But isn’t it pretty? 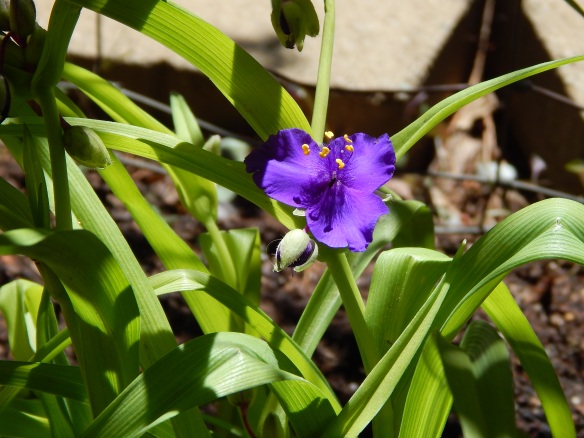 I planted petunias early this year in this area. I got a “rosa Bonica” in a little four inch pot. Its supposed to bloom prolifically, so I think it’ll be a real nice addition to this area  in the future. 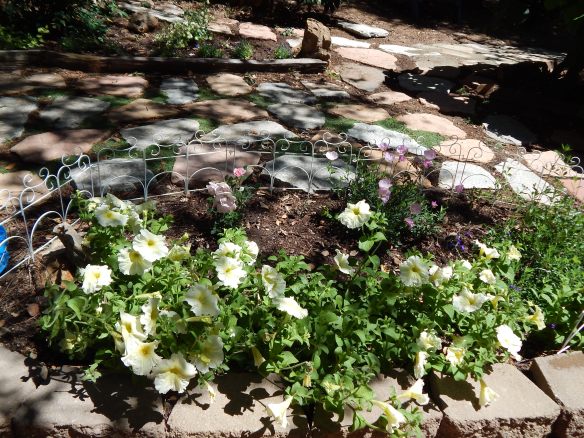 Just a shot of the marigolds, geranium, and a volunteer nasturtium. This was one of the areas where I weeded a LOT. 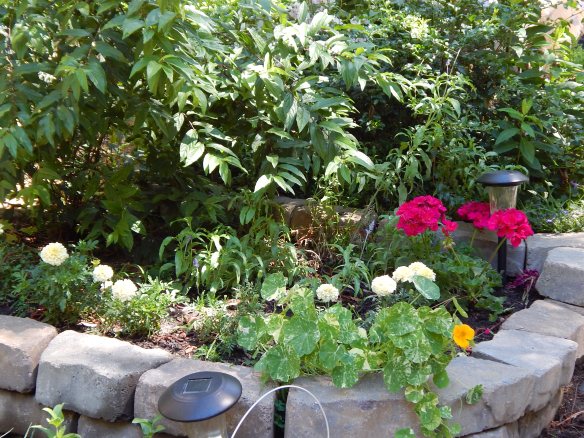 Much earlier in the year, I split a six pack of sweet peas with ML, my rug hooking friend. I’ve never had much luck with sweet peas, and I planted these in an “iffy” area–soil wasn’t primo. So I have been very pleased to see them take off and bloom a bit. 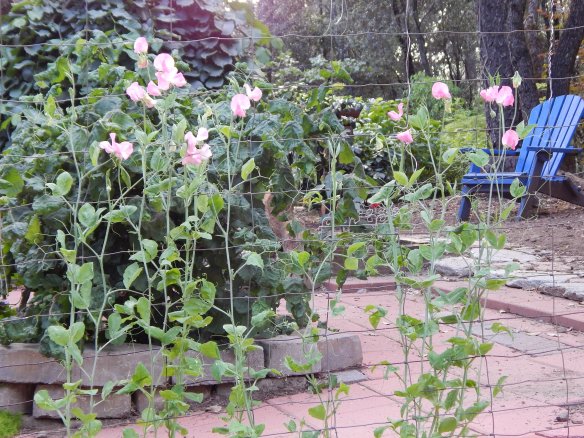 A nice shade of pink, don’t you think? 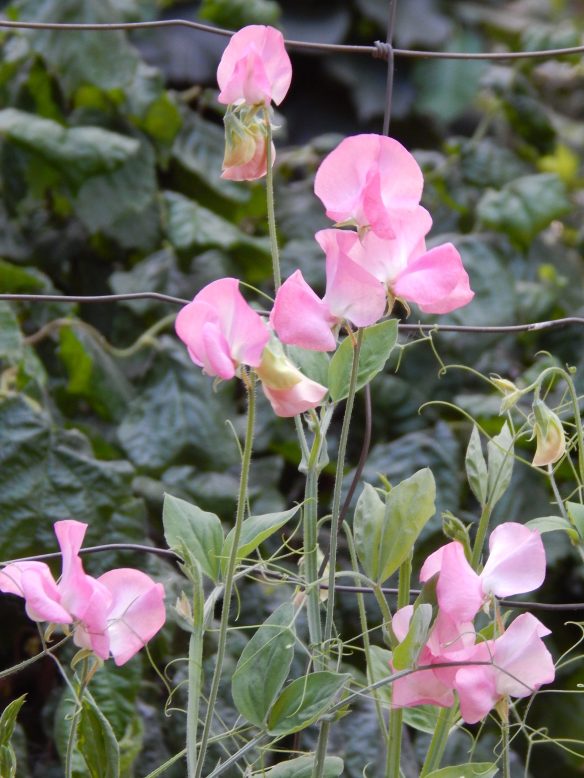 I have tried to get a good picture of this area. It is so charming to me. All these petunias, each of them a different color, self-seeded themselves between the stones here. I never thought they could make it, but so far they are doing very well.

And that is the end of the garden report for the week! If you’ve made it this far, thanks for following along, and have a great weekend.