I imagine that some of you think I have abandoned the garden in favor of my chicken duties. Not so. But the garden seems to be in one of those in-between stages, and there didn’t seem much to share with you. So this morning I headed out with my camera to see what there was to see.

There are some places where I am not fighting mother nature. This little bed has always been difficult to get things to grow in. Some of the fairy impatiens popped up here, and I decided to just let them stay.

Just above that little bed is the shade garden. Finally, one of my heucheras is doing well. I added a little begonia and am trying impatiens again. I used to have a lot of success with them, but haven’t tried much in the past few years. That is my first hosta behind the impatiens.

I changed out this sun garden. It used to have the big patch of carnations in the middle of it. I think I over-pruned the carnation last fall and killed it. Anyway, I found a small baby’s breath plant for the center, and then got some of my favorite white marigolds. I got a six-pack of pansies called “waterfall blend” that had various blues/violets/whites and planted them in there. And finished off with some new sweet alyssum in a crystal blend. Some of the white sweet alyssums still come back outside the planter. Oh, I also have some columbine planted at the back of this planter. I don’t think they’ll bloom until next year.

Just above that I have some pansies (Noah seems to have finally tired of eating all the pansies.) I planted a few zinnias in between to take over when it gets too hot for the pansies.

I’ve gotten a few grasses. I bought a six pack of  fescue grass for the patchwork path, and there were three leftover, so I just popped them in the ground next to the violet path. They seem to like it there.

I found this fiber optic grass. I had it several years ago and loved it. So I’m excited to have it again.

Next to the fiber optic grass I planted these Starry Night petunias! Aren’t they spectacular? 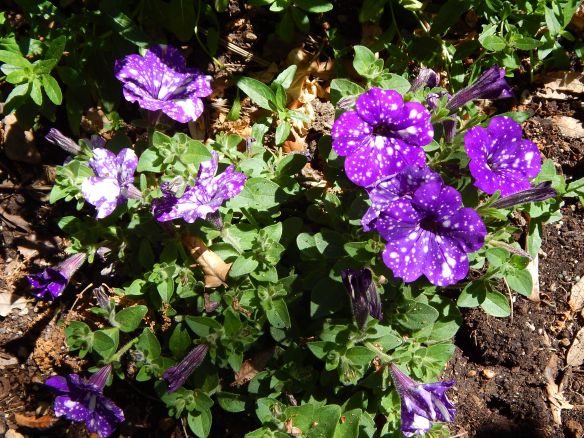 The petunia breeders seem to be having a heyday breeding so many different colors. I couldn’t resist getting this one at the nursery today. Not because I like brown and white flowers, but because it is named Latte! How could I not get it?

I planted some extra snapdragons in this front bed. See the short ones that are just starting to bloom? That’s because Noah mowed that plant down. There’s something to be said for his unplanned pruning! Oh, and I planted some lupines in here. They are growing well. I’m thinking they are another one that won’t bloom until next year.

Walking back over to the other side of the garden, I passed the hydrangea bushes. this is the very first bloom just starting. 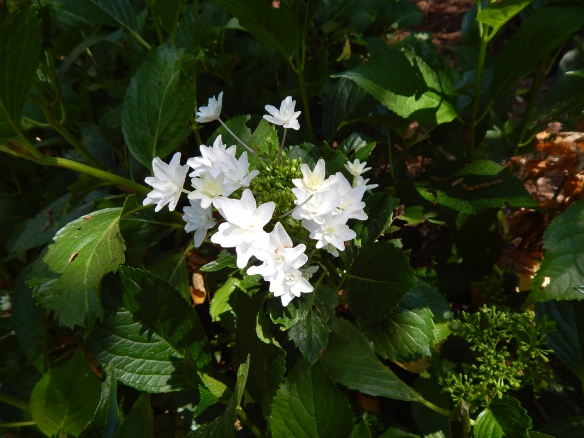 And I couldn’t resist including this Japanese maple. It is so vibrant and green. All the plants are loving our wetter climate this year!

On my very last trip to pick up the last stones for our projects, I let myself buy this heart shaped stone. I like seeing it every time I walk by.

I don’t think I showed you my newest bonsai tree. I bought it at my last bonsai class a few weeks ago. Its a little elm tree.

Here is my bonsai bench.

And here is a new project. One day I realized that I never sat out in my garden. And I thought, the place I really like looking at is right out my bedroom window. That is a nice sized area that is relatively flat. I thought it might be a nice place for a patio. So I talked to J. the Contractor, and sure enough, he has experience doing patios too. He has done colored and stamped cement. So that is a project for next year. I am also going to have him do something with that old cattle gate there–put in some kind of decorative fence and gate. And maybe build some benches for my bonsai. In the meantime, I decided to move some of my chairs out there to see if I would like it. MLG spread some of the shredded cedar there to keep the dust down. It is a very nice place to sit, and the chairs are in the shade for most of the day, which is a big plus! 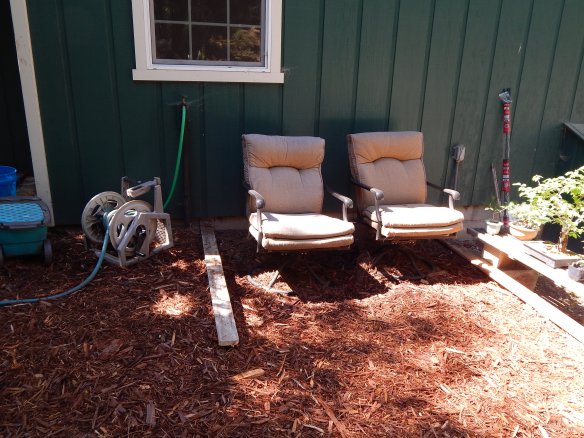 Well, how about that. I did have a lot to share with you this week! I hope everyone is enjoying their weekend.

3 thoughts on “The Garden”