And here is where the longer story takes place. Although my experience with post-op pain was not as bad as I had expected, I have come to realize that returning to “normal life” is going to take a little longer.

Doing exercises three times a day is somewhat daunting. But I am determined to keep those up. I’ve found that I need long naps, sometimes two or three a day! For a non-napper, this is a big change! But I am embracing the nap 🙂

Shelley named Sophie “the Healer Dog.” I put her on the bed with me when I do my exercises. Here is the Healer Dog trying to encourage me: 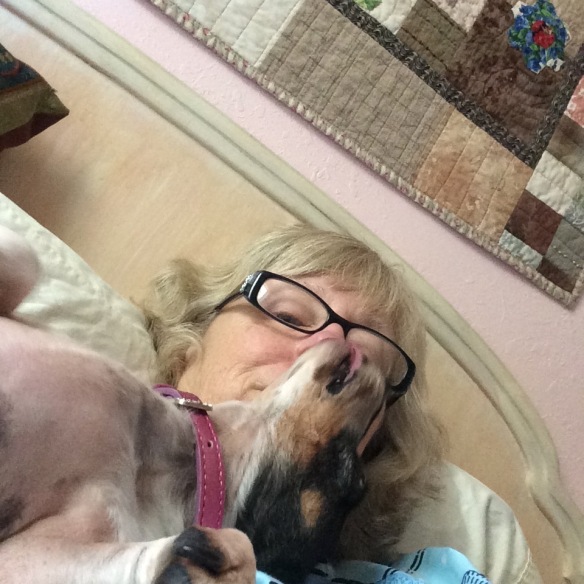 Noah returned home after two weeks, and after a couple of days, I decided to start taking longer walks with him. I was pretty excited this morning when my walk was as long as I had been taking pre-surgery! I walk slowly, but I feel steadier on my feet, and it is such a wonderful feeling to walk for that long and NOT limp. I know that I am still on pain medicines, but it is amazing how much limping made other body parts hurt.

Icing after exercise is another part of the recovery. The hospital sent me home with a lot of disposable ice packs so it has been very convenient to rotate those in the freezer to have ready when needed.

This week I went to PT for the first time. It was very disappointing… It might be partly because I am doing so well, and partly because I was already doing the exercises that needed to be done… anyway, it was a disappointing experience. The one thing I did garner from it was that getting on a bicycle would be helpful for recovery. I’m pretty excited about this. In a week I should be able to drive, and I will be going to the gym for biking sessions, and shortly after that I will be able to get back in the pool.

I still have good days and bad days. The bad days aren’t so much about knee pain as they are about just feeling terrible. And when I feel terrible, things just seem to multiply on that day. Like, last Saturday, I woke up just feeling bad. Then the neighbor’s dog kept coming down and making Noah bark like crazy. So then I made all the dogs come inside for a while. A few hours later, I decided to let the little girls out to see if the coast was clear, and Chloe started barking very insistently. I went to see what she was barking at, and it was a HUGE rattlesnake coiled up on a rock inside my yard!!! Eek. Wrangled all four girls back in the house while I was calling my neighbor to come and kill the snake. Before he got here the snake started to move. I didn’t want him to disappear in my garden somewhere, and so I went and stood about ten feet from it, which worked. Yep. That was a very bad day

Overall, I think I am doing better than most who have had knee replacement surgery. I’m sure that it was a partial knee replacement is one reason. Another is all the prayer that has taken place. And of course, I would like to think that a big part of it is that I remained active and continued to do my exercises up until the day before surgery.

I have to remind myself that it will take time to get back to normal, and to not be impatient.  I am actually very excited about “Debby 2.0” as Shelley named the post-op me.