The chickens are starting to lay eggs! I’m having so much fun gathering them. So far they’re laying all different sizes. Even though all my chickens are standard sized, some of their eggs are still “banty sized.” The big ones are double-yolkers!!

Sometimes this is exactly how I feel: 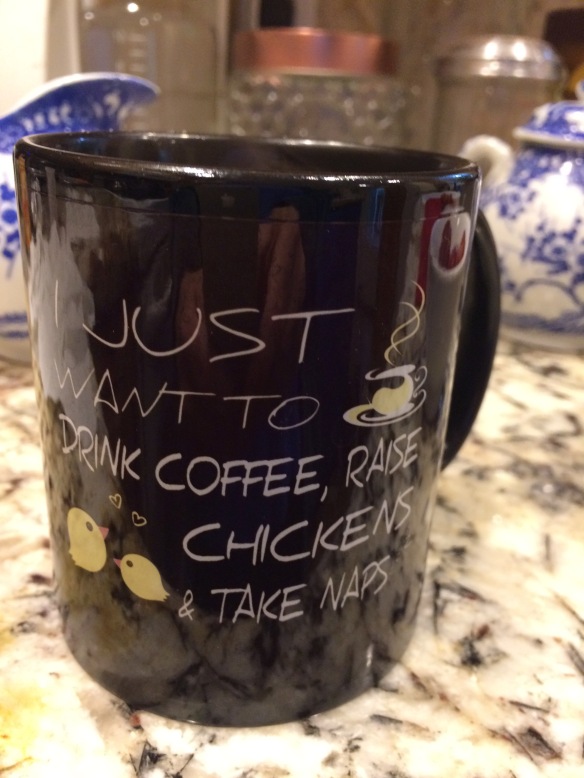 My knee is doing great. But the heel on that same leg hurts like heck. I went for my final checkup with the surgeon (for 9 months) and told him about it, and they did x-rays on it. No fracture. The physical therapist doesn’t think its plantar fasciitis (I don’t think so either) but they are having me do some stretching exercises and that seems to help a little. Its just discouraging to still have that same leg hurting to be walking. HOWEVER, after saying rather pitifully to my BF that I didn’t think I would walk too much any more because my arthritis was so bad, I decided that I was being a baby. So I have been challenging myself to take longer and more vigorous walks. It feels good mentally

I’ve been trying out some new recipes. Jill recommended this one, which says its pizza sauce, but its really just a marinara sauce recipe. Its easy to vary the recipe a bit using what you like/have on hand. I like chunks of tomatoes in my sauce, so I usually use  I am loving making this and freezing it in zip lock baggies and then using it for whatever. I made a low-cal chicken recipe using some chicken tenders. I mixed in some fresh spinach with the marinara sauce, used less than half a serving of penne pasta, and then topped it with some fresh mozzarella that was on sale. YUMM, and only 250 calories! Sorry, no picture.

Then, Biz recommended this pumpkin baked oatmeal. I looked the recipe over, and the stats on it were pretty high–400 calories for a serving. Then I realized that the serving size was huge, even for a volume eater like me. So I cut it into 8 pieces instead of 6, and voila! 300 calories per serving 🙂 I got up bright and early one morning, and made this recipe. Right before I put it in the oven, I had a brief thought that there was not much pumpkin pie spice in it, so I took a little taste, and it seemed okay. After it had been in the oven for 15 minutes, THAT’s when I realized that I actually left the pumpkin out of the recipe. Aaargh. I guess I wasn’t quite awake enough. Anyway, I adjusted the cooking time down, and it is still quite delicious. I can’t wait to make it with the pumpkin in it!

Thursday night we had a good rain storm, the first in months! Saturday I went out to see what was still looking good in the garden. Here are the petunias I planted by the studio door. I think I will always have some flowers growing in this–it mostly protects the plants from the deer, and its cheerful to see the flowers when I drive up. 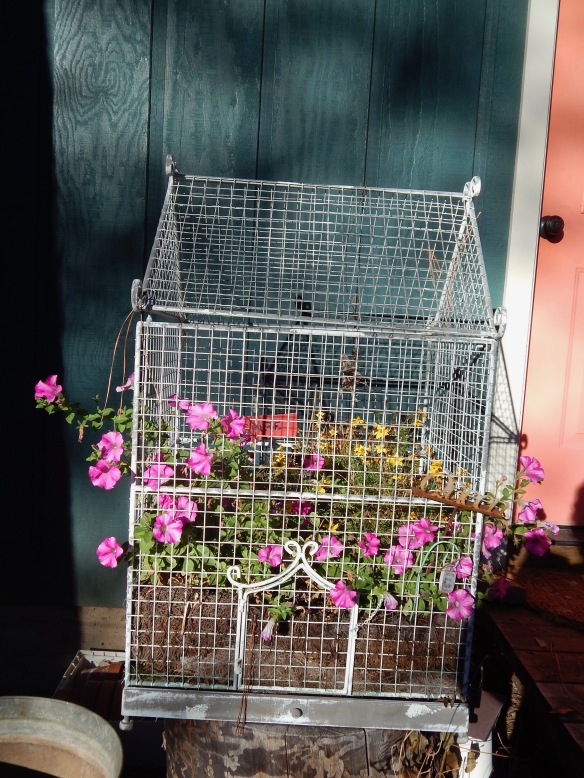 The roses are loving our cooler temperatures. This is the “wild” rose. The branches hang down. I plan to put a little support for it for next spring, but I love how it is a prolific bloomer. 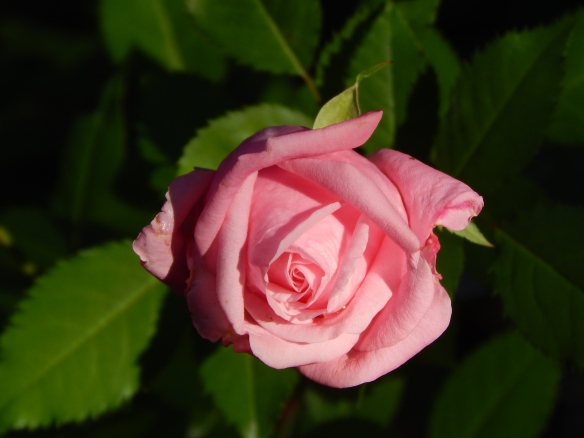 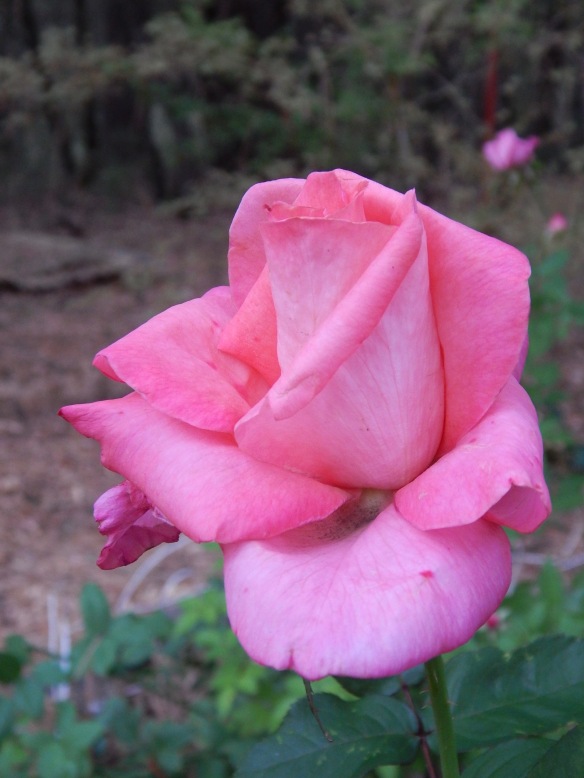 The tuberous begonia. I got a two for one in this pot! 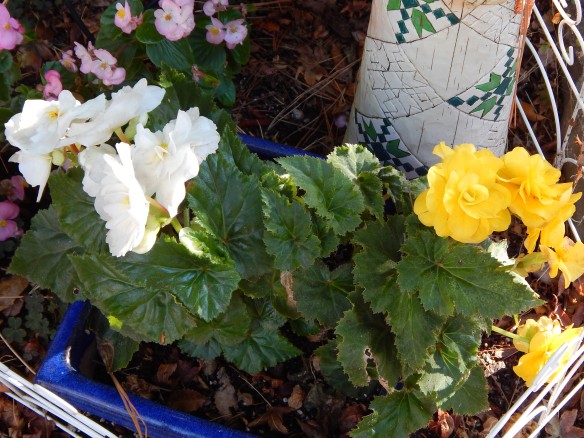 The dwarf abutilon is loving the fall. 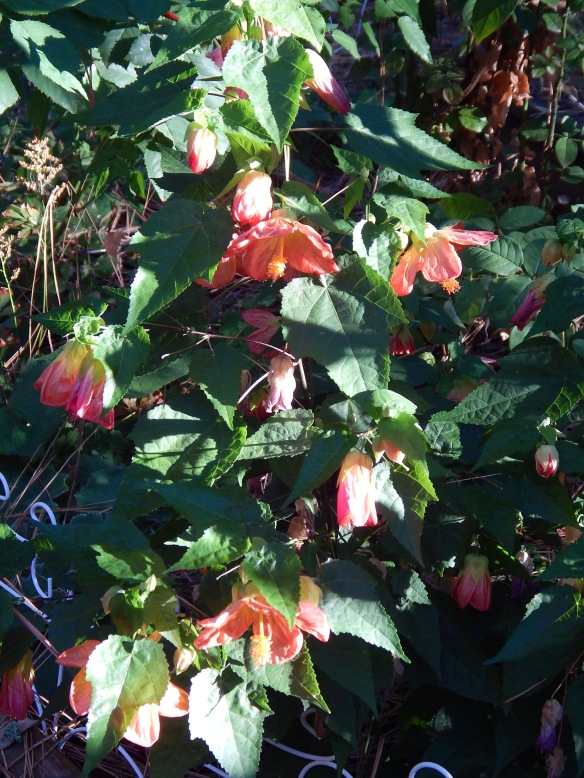 And the mandevillea vine is still going strong.

So, in other garden news, I have voles in my yard! I couldn’t figure out why the dirt was rising up in certain areas. MLG is here today, and pointed out the vole trails to me. I found these solar vole repellants on Amazon. Anyone have any experience using these things?

And that’s about all for now. Have a great week!

Since I came home from my quilt show a week ago, I’ve spent more time working in the garden. It seems like there’s a lot of catching up to do… my new drip watering system has made the weeds very happy

Here’s some photos of what’s happening. These are plants that seem to be enjoying the cooler weather we’ve been having.

The front flower bed. We’ve enlarged this bed a bit, and when winter comes, we will add more soil to it. When we first put it in, it wasn’t raised very much, and so there’s not that much good soil in there. This is what I see when i drive up to my house, and I enjoy seeing all the color. 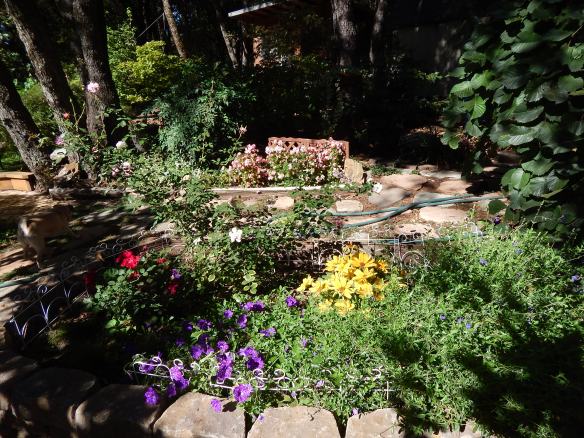 I got a tuberous begonia, which mostly enjoys a cooler coastal weather. But since I got it in September, it has actually bloomed a bit for me. 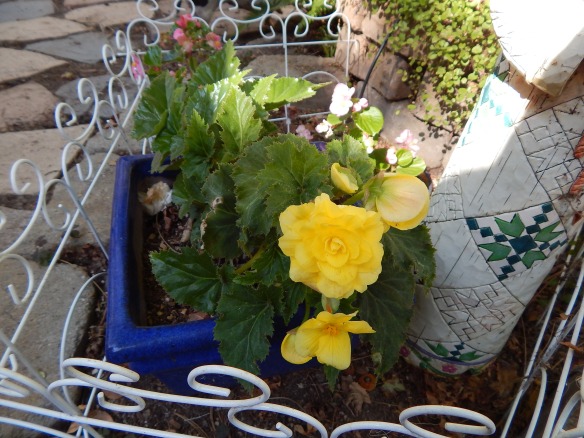 This bed is past its prime, but like I said, the cooler weather has given some  of the flowers renewed vigor. Especially that one volunteer nasturtium. 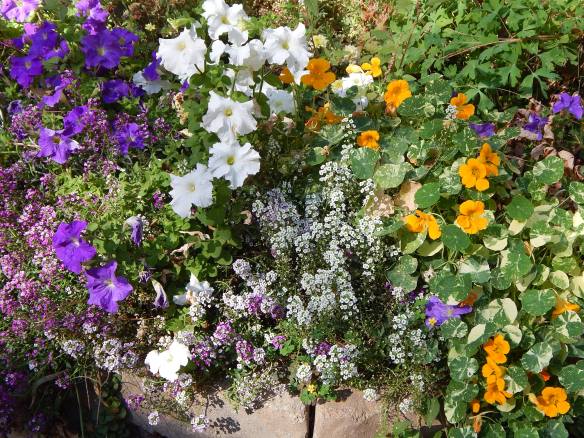 Here’s the salvia with the rudbeckia(?). They’re a little crowded now, but they will both do so well next year. 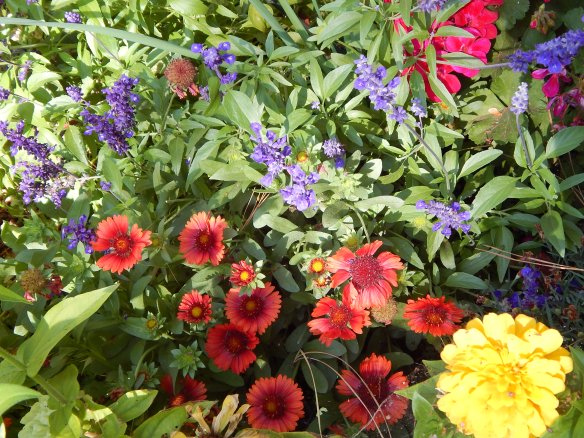 I mentioned that this hydrangea turned green when it was past its prime, but then a month later the blooms turned pink. This bush is very rangy, but the flowers are so beautiful and last for so long, its worth it.

I got another dwarf flowering maple (abutilon). I love these crinkly blooms. 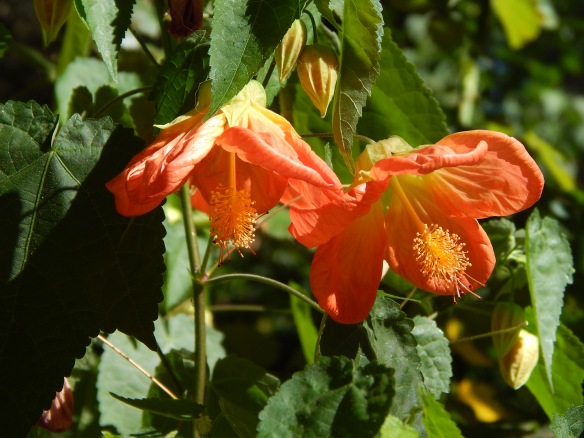 And here’s the zinnias, which you can see are crowding that rudbeckia. So very cheerful, and these blooms last a long time too!

And that’s the garden report for another week. Have a happy and safe weekend.

Now don’t get all freaked out. This past weekend I went to the big Reptile Show in Sacramento. For over 30 years I’ve seen the billboards for this show as I drove to work. And every year I thought about going, but never made it. My brother LOVES reptiles, and had a variety of different snakes and lizards growing up. When we had our pet shop together, we always had a few snakes in the shop. I’m not afraid of snakes, as long as I know what they are, and know they are not poisonous. So anyway, this year I finally went to the Reptile Show!

There were a ton of vendors, and this is how they displayed all their baby snakes for sale–in these plexiglass cases. Weird, huh? 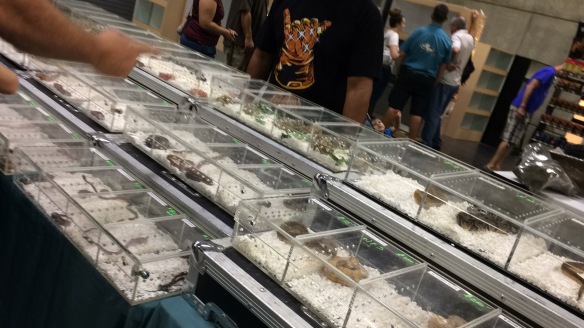 But then I wandered around all the vendors. I found this one beautiful snake, and started talking to the guy who owned it.

He started telling me the story of how he developed that color, and I have always been interested in color genetics. And then he let me hold one of the babies! 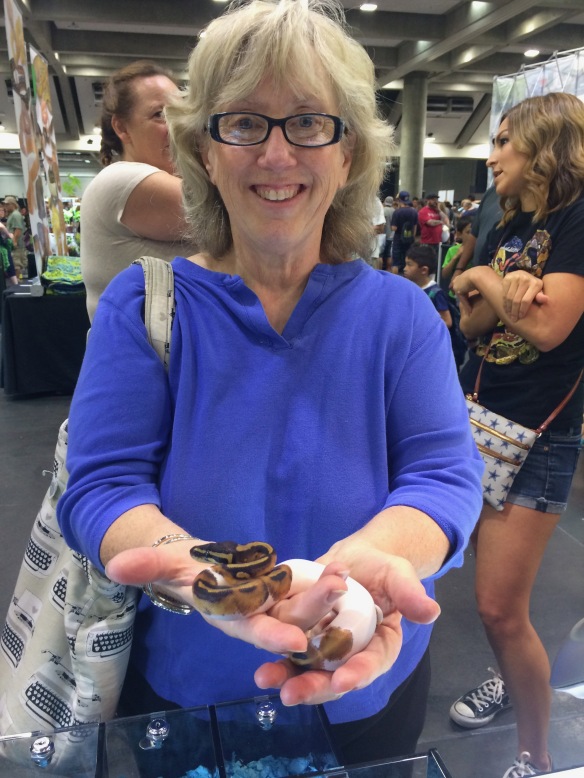 I said I hoped this guy got a lot of chickens for dinner after putting up with this for two days.

I really like little alligators and crocodiles. When we had the pet store, I had a little Caiman (relative of alligator) for myself for a while. This is a Dwarf Crocodile.

They even had a couple of booths with these meat eating plants for sale! 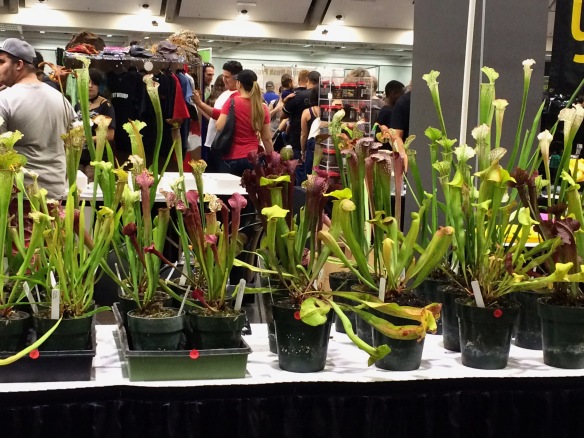 And like I told my friends, that is enough reptile show for me for the next thirty years. But I’m glad I went.

On the way home I treated myself to a visit to a bead store. I have quite a few beads, but when I worked on a recent project, I realized I needed some more brightly colored and sparkly beads.

That was a really different weekend for me. I usually talk myself out of adventures like this in favor of staying home and doing what I enjoy most–quilting, working in the garden, and going to the gym.