With warm weather this week, EVERYTHING is popping out all at once. I took these pictures this morning. And this afternoon, there were more things blooming! These are the pink tulips I got from John Scheepers. They had a special on tulips–80 pink tulip bulbs for $35. I think there were four or five varieties included. I also got three types of daffodils and some oriental lilies, which will bloom later this year. I have been so pleased with the good quality of the bulbs I have gotten from John Scheepers. I know I will be a regular customer each fall. 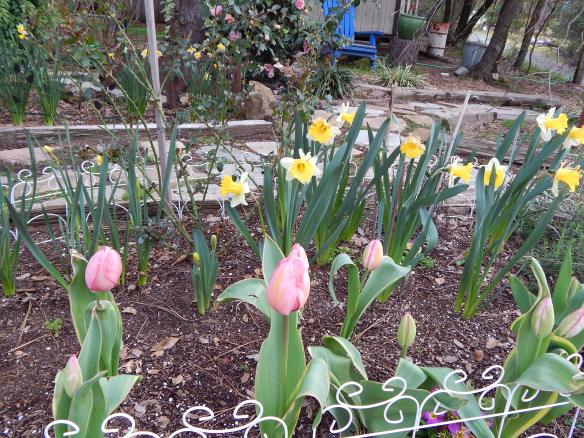 Easter blessings to all!

I tried a new recipe a couple of weeks ago, and it was so good I made it again this week. Its Biz’s Potato Crusted Quiche. She uses baked potatoes for the crust, and the recipe is so simple but so good, I love it! 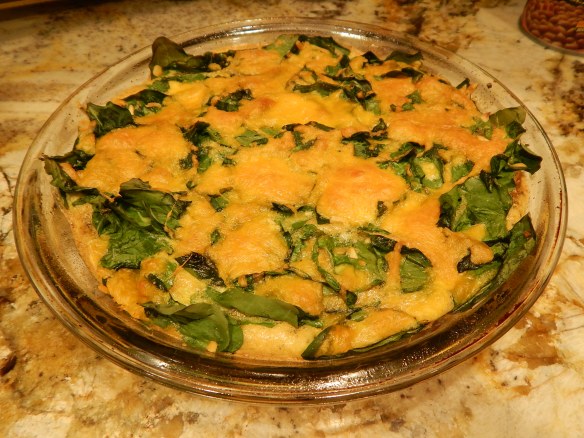 Another thing I’ve been loving is my own homemade dark chocolate candy. I actually like it better than See’s candy! I buy 85% dark chocolate from the bins at Sprouts Grocery store, and melt about 4 ounces, and use 4 ounces of walnuts and 4 ounces of dried apricots, and mix it all together and make little candy clumps. Yummy and not too sweet!

In between sputters of winter (snow is predicted again for Sunday,) Spring just keeps on coming. We had a huge rainstorm the past few days, but today is bright and sunny, so I decided it was a good day to take a few pictures.

These hyacinths have done better this year than in years past. 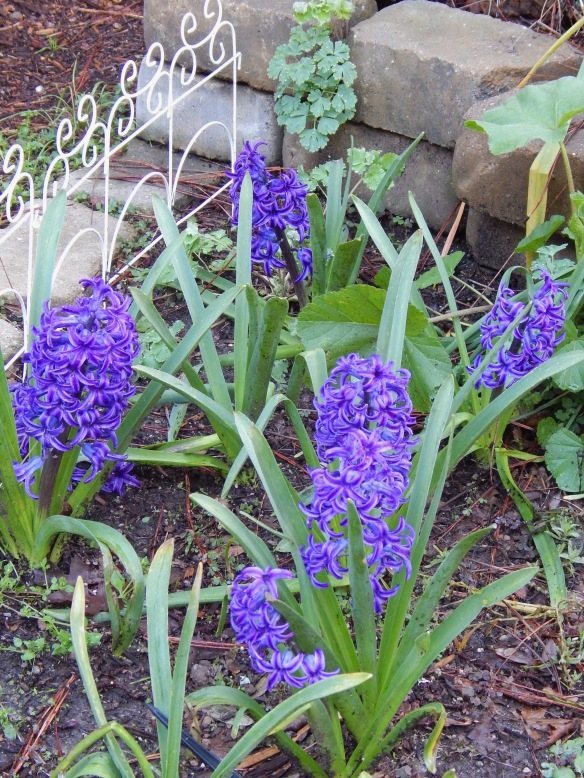 I see this when I drive up and it makes me happy:

The grape hyacinths have done well this year too. And you can see two of the lupines have made it. I’m very excited to see what kind of blooms they will have.

I had to go outside the yard to get a picture of this corner bed. I don’t even remember planting these small daffodils, but they have put on a good show. Chloe and Noah had to check me out. You might be able to see the fortified fence that Kevin installed to keep Noah out of this front bed. I hope it works, because it also has a “gate” opening so that I can get in there and tend to this bed.

And that’s about it for now. I am just waiting for all the tulips to pop out!

During the late fall and early winter, Kevin (MLG) and I continued to make improvements to the garden. By that I mean that I would have half of an idea, and ask him about it, and he would improve on the idea and actually do the hard work of making it happen.

And here’s what I mean by Aliens. No, not Sophie, although she is a rather strange little dog. See all that dead dry stuff at the top of the stones? Remember when that was a cascade of pretty green wire plants? Yes, the aliens are those stinkin’ moles or voles. they just love tunneling along next to the rocks and so I think they completely destroyed that plant. It is pretty hardy, so I am waiting to see if it might return. Also, see all those little white fences haphazardly placed in the middle of that bed? That’s my version of trying to keep Noah out of there. It seems that its become one of his favorite digging places. I bought a pack of plants at Costco, and so I planted bleeding heard, astilbe, and a fern in there. Its a pretty shady bed, so hopefully these plants will do well. I also bought some stuff at Costco that is supposed to bother the breathing/nasal passages of varmints, so I sprinkled some in there. I noticed as I was sprinkling that it smelled slightly of garlic. So sure enough, when I let the dogs out, they were very interested in smelling it. For some reason they have never been interested in smelling the moles.

When my BF was visiting last summer (doing my post-op care) she had the idea to widen this bed and add an extra row of stones. EXCELLENT idea!! I’m very happy to have more room for planting here. Right now I have daffodils and tulips that I got from John Scheepers in there.

At the beginning of this bed, we had the fringe plant. It wanted to grow bigger and bigger, and I didn’t like it there anymore, so Kevin dug it up and moved it to the back of the garden. Now I’ll have room for some pretty annuals there. Right now, of course, more tulips.

And this narrow front bed. Something I actually did myself. I had an herb garden there. But I never used the herbs, and they were a MESS. I pulled all of them out, and Kevin put some kind of border thing to keep the bricks in place. And now I have a place for pretty plants when I drive up. More tulips right now (John Scheepers had a great deal on tulips last fall 🙂 )

Okay. This front bed… I called it the prison garden. Because to keep Noah out of it, we had it very tightly guarded. So guarded that I couldn’t even get into it to weed or garden or anything. That was bugging the daylights out of me. So I stopped at Home Depot yesterday and bought two kinds of fencing. I am going to have Kevin choose which fence to use and have him reinforce the fence because otherwise, Noah will still knock them down (this just happens to be the place he loves to stand and bark.) But now I will be able to get in there. I planted a couple of the astilbes and ferns here because between the honeysuckle and the cherry tree it is mostly shaded.

Ah. What is this a picture of? Well, in that empty spot there was a HUGE Rose of Sharon. I didn’t think it was worthy and had been thinking of removing it. Well. When I went over there to inspect, the moles had completely eaten the roots away, so that made my decision easy. 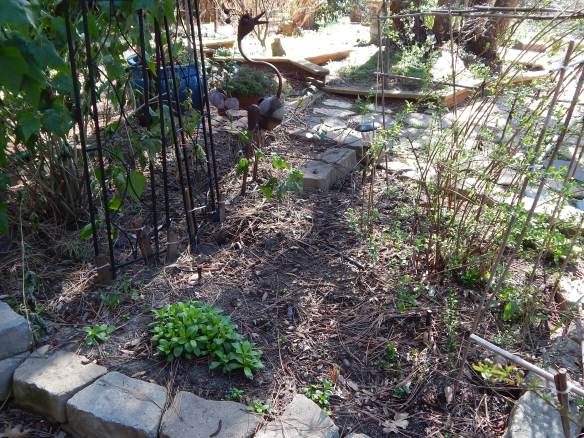 And, here I removed that rose that always grew into the oak tree. I think either it was a rogue rose or  maybe it got too much shade. Either which way, it went home with Kevin who loves to rescue plants.

And lastly. This is the infrastructure that probably pleases me the most. As I’ve said many times, the ground where I live is very rocky. So this area between my back stairs and the chicken coop was very uneven, and I would stumble a lot when walking out there. I discussed with Kevin, and between the two of us we came up with the idea of using some of the free mulch that the tree guys had left in my back driveway. Kevin put a nice little border there to contain it, and I just love walking out there morning and evening. Very nice and even and soft to walk on.

Some of this stuff is very discouraging to me. Especially those varmints. But on the other hand, I remind myself that a garden is always a work in progress, and most of what’s happened is just an opportunity to change and improved the garden. I’m excited for spring to arrive and to get new plants to make it all pretty again.