I decided to go to an Art Quilt retreat at Lake Tahoe. It was the first week of November, so for weeks ahead of time, I was nervous about the drive up–would it snow??? Sure enough, snow was predicted for the day I drove up 😦 I went and got chains for my car, and then nervously checked the CA road reports every day. And then the weather changed. No snow, and it was a beautiful drive up there!

I love Lake Tahoe. I’ve told you before how we spent many summer vacations in Tahoe when I was a kid. Now it seems I go more often in the fall, although I usually go earlier than this. The lake changed every day. The first day it was clear and smooth. 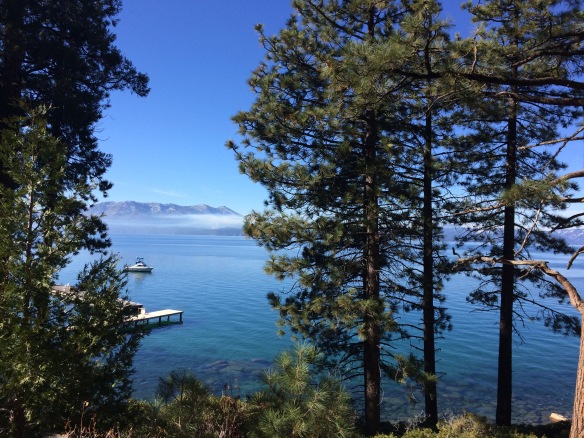 The next day there were clouds obscuring the mountains, and the lake was a little choppier. To me, that makes it look almost like the ocean. I like it better when I can see the far shore. 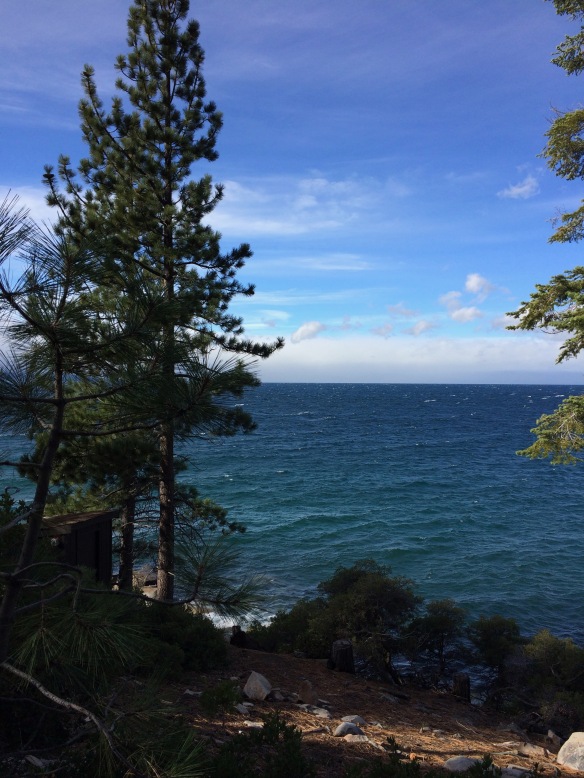 The next day it was even choppier (and colder!) 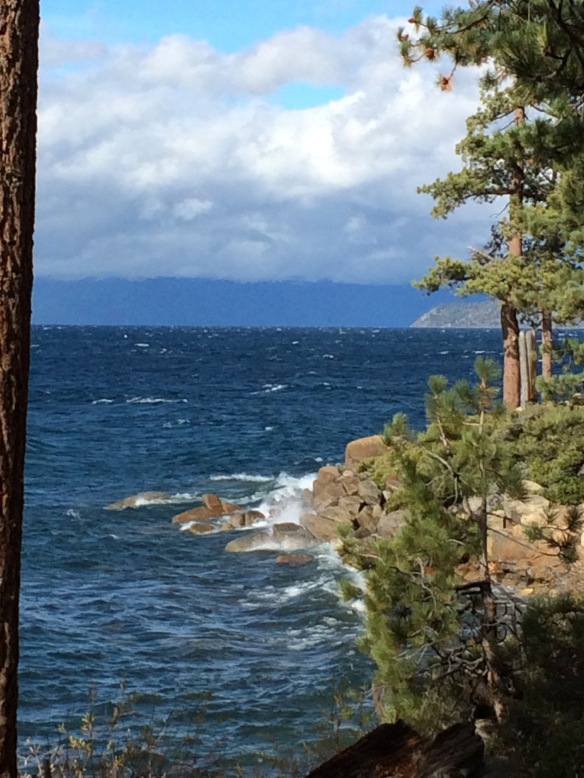 I noticed on the drive up the huge boulders that line the river that runs along the highway. These big rocks are everywhere. I really like them. 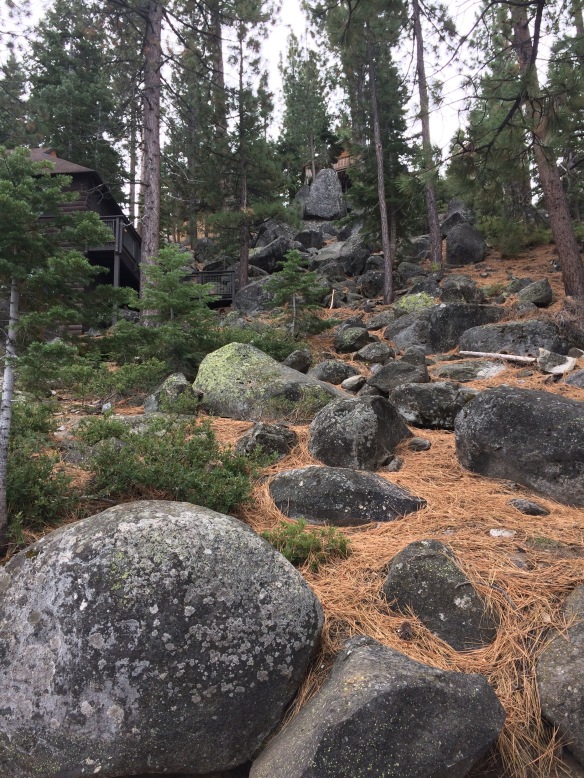 And then, before you know it, it was time to come home. And even though I observed that the pine trees in Tahoe were prettier than our pine trees at home, I was so very happy to be coming home. I love where I live. This is one of the things I love. Just the simplicity of the live oaks turning bright yellow and shining through the pines and the scrub oaks. 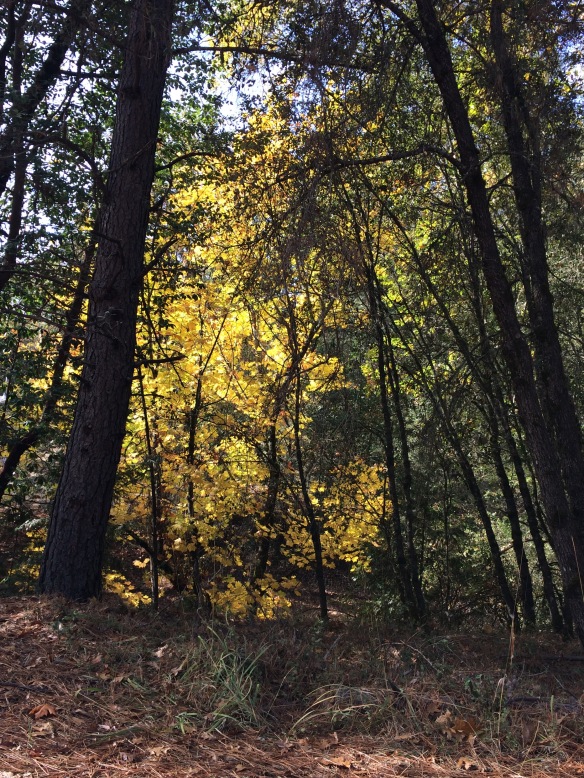 Back in the garden, some of the Japanese maples were turning colors: 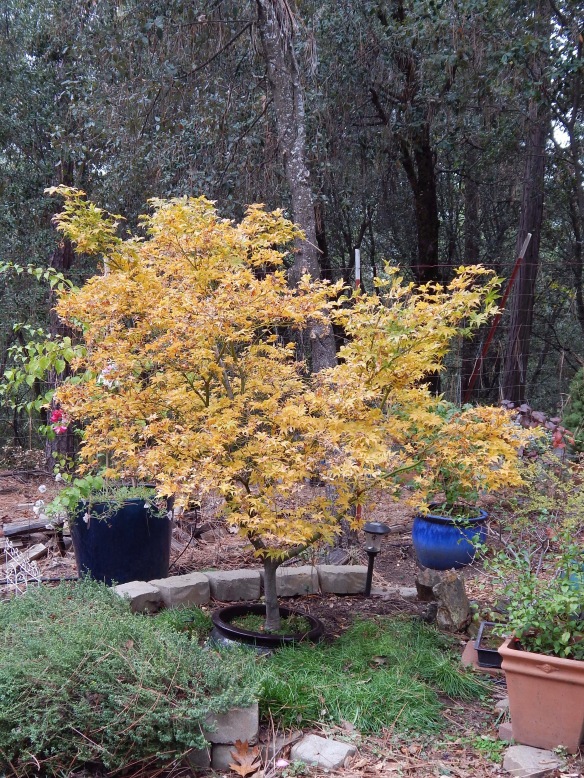 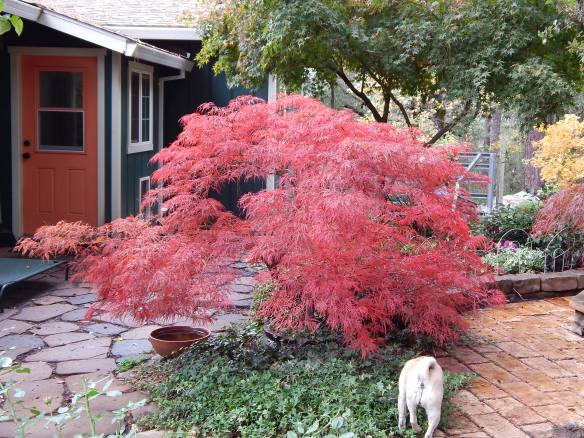 And here’s something that JUST. SHOULD. NOT. BE. Two of my foxgloves were blooming! Does this mean they won’t bloom in the spring??? 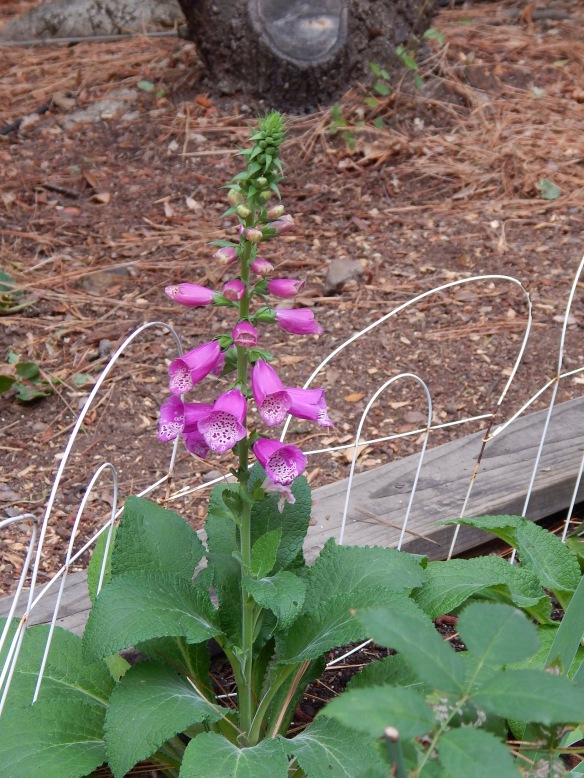 Here’s where we planted two Aspens at the back of the yard. I will be so excited when they get a little bigger. They are so beautiful in the fall–there are thousands of them growing further up the hill on the way to Lake Tahoe. 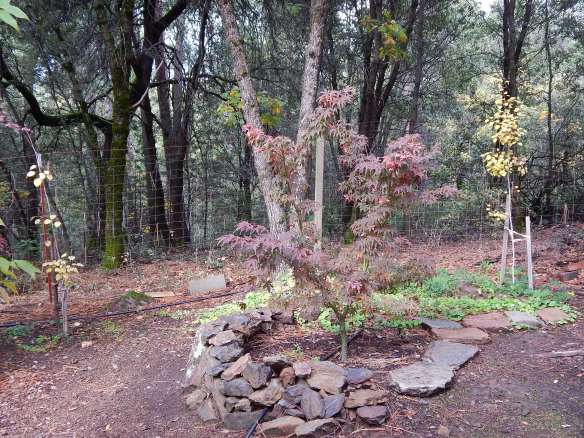 Did I show you this already? We rescued some logs from a recently chopped down pine (phone company had to remove some dead pines.) And MLG made this little area to display my bonsai trees! 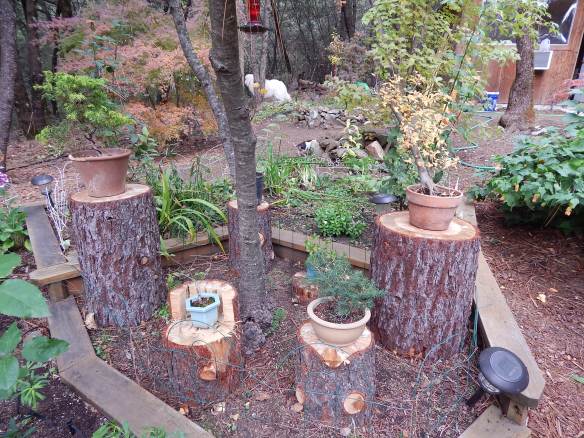 Some nice color from this maple bonsai. 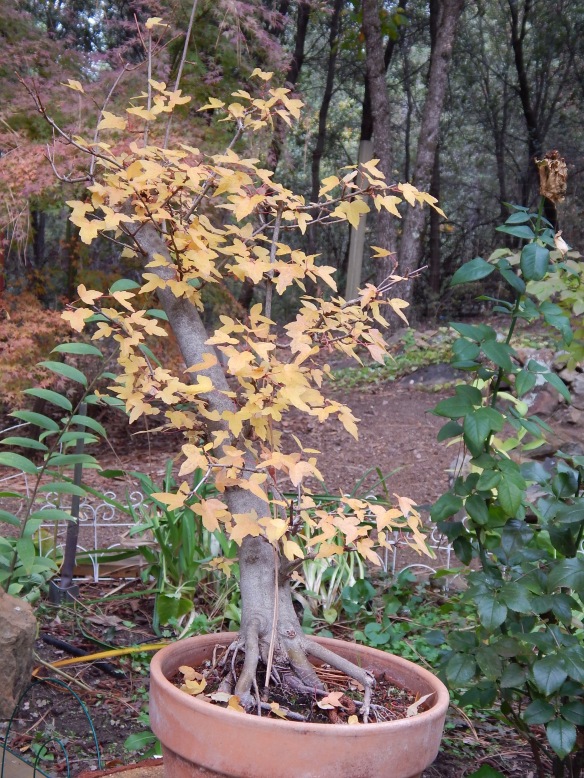 And that’s the report for now. I hope all of you have a safe and happy Thanksgiving!!

Last Saturday I did something I’d been thinking about for years. I went to a bonsai class. Now I’ve loved bonsai since I was a kid. And when I moved back to California in 1986, I took classes from a bonsai master while I was in the Bay Area. Then I moved up here to the foothills, where its hot and dry all summer. Between the heat and the deer, I eventually gave up on my bonsai. Periodically over the years, I would buy little trees, and in fact I have quite a few right now still in pots. But bigger pots, where the roots won’t dry out so easily.

There’s been a notice on the checkout desk at the local nursery for years–bonsai class fourth Saturday of each month. FINALLY, I remembered to copy down the phone number, wrote it on my calendar, and actually went to the class. One of the motivating factors was this new drip watering system that we’ve put in. (That’s the royal we–MLG actually put it in.) When I was buying parts for the system, I saw “misters,” and actually bought a package. Those would be perfect for bonsai, I thought.

Anyway, off I went to bonsai class, and it was more wonderful than I could have imagined! The flyer said the teacher had some nursery stock for beginners to buy. I pictured a table with about 5 straggly plants on it. NO! He had probably an acre of bonsai trees of every type and style. Of course, the first two I picked out were “not for sale” and $300.00. Then I settled down and picked out a nice little tree for $20, including the nice pot! It is a Norway Spruce. 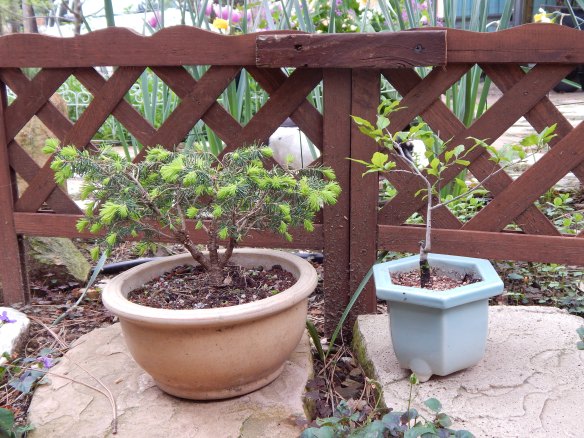 There was a young woman there who was so friendly. We ended up sitting together and chatting quite a bit. (Side note: she is a world class power lifter–her deadlift is 440 pounds when she weighed 130 pounds!!) I went looking at more trees with her, and picked up a little Dwarf Persimmon, just because it was so cute, for only $5.

The teacher was excellent–gave two demos, and then spent time with each student individually. He is about 70 years old, and has been passionate about bonsai since he was 14 years old! He told the story of going to the state fair as a kid with his sheep, and seeing a bonsai master giving demonstrations, and said he spent more time at the bonsai booth than in the barn! There was also a man there who had a lot of experience with bonsai and we chatted a bit. He mentioned taking his daughter for horseback riding lessons in a nearby town.

This whole experience was so energizing, I can’t explain it. After I left, I had the thought that I was going to ask Dr. P if I could take horseback riding lessons after my knee heals! Another childhood interest that I gave up on. And the next day, while sitting in church, I had the thought that I might get a cello, and re-learn how to play. I played cello from third grade through being a senior in high school, and then foolishly sold my cello. Although, thinking back, I’m not sure it was foolish, because it might have sat and collected dust for many years…

Anyway, I don’t often try new things. There is only so much time in life for various interests. But this was such a great experience, I just might be more open to new experiences in the future.

Hopefully I will be teaching a new class at the Cotton Patch in Lafayette. Its Advanced Embroidered Quilting, and I am offering four different styles of quilting. Here are the four types of embroidered quilting I am offering to teach: I’ll let you know when the classes will be as soon as I know. All […]